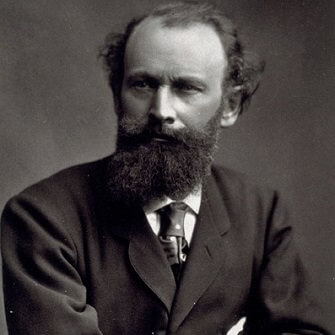 Setting oneself apart from the norm requires determination and sense of focus - two distinct qualities that Edouard Manet possessed. It was his unwavering faith in his abilities and persistence to perfect his craft that made him one of the most renowned artists throughout history.

Edouard Manet was born in Paris, to an upper-class family with a remarkable background. As a young boy, he lived a luxurious life with his parents and two siblings. He was an art enthusiast even at a young age. However, he experienced lack of support from his father who hoped he would pursue a career as a lawyer or naval officer. Although he failed the examinations in the Naval Academy, he was forced to enter the Merchant Marine as a student pilot.

Eventually, he returned to his deep passion, which was to become an artist. He presented his father with an impressive portfolio of his paintings completed during his voyages as a pilot. That helped him earn his father's faith in his artistic skills, and he was allowed to pursue art studies led by the academic artist, Thomas Couture.

Aside from his intensive education, Manet improved his skills by travelling and discovering art styles of famous painters including Caravaggio, Francisco Goya, Peter Paul Rubens, and Diego Velazquez. He was greatly impressed and inspired by the extraordinary techniques of these artists who proved to be masters in their craft.

During the 1850s when Manet began his art studies, he realized that some subjects were hardly presented in various paintings at that time. For instance, there was a rarity of artworks that depicted a typical city life in Paris. Thus, he explored more on these themes and created fine pieces that have impressed younger artists in that period.

Having one's paintings exhibited at the Salons was one quick way to gain success as an artist, and this served as Manet's ultimate goal as he worked hard on his craft. Unfortunately, the Salon juries leaned more towards mythological and biblical themes, which were not quite Manet's strongest points. Yet, he took a chance to submit his works to the Salon, and he attained success in a few of them. His subjects were usually of contemporary urban themes, and these caught the attention of the juries, as well as the Salon-goers.

Manet's style reflected a free manner of painting where he attempted to create form by using subtle areas of color instead of the blending of tones in a gradual manner. He was influenced by Diego Velazquez' style, but Manet's artworks had a more contemporary feel in them while implementing his influences' motifs.

One of Manet's popular art techniques was the alla prima painting. This style features the laying down of colors that resembles the ones he envision in his thoughts. This unique approach was well-accepted by Impressionists, as it worked perfectly in capturing atmosphere and light as one paint in the outdoors.

Another interesting art style of Manet was the loose handling of the paintbrush to produce a sense of flatness while adding some volume to certain areas. Back then, this painting style seemed as a popular technique, yet contemporary artists consider the flat appeal as a characteristic of modern art.

It is also worth noting that Manet was more interested in using different colors that can represent a single tone while maintaining just one reality. Instead of using color scales, he relied more on the use of strong and contrasting tones, which transformed his works into somewhat one-dimensional. His works may also be simple, but they are extremely difficult to make because he has sworn against the application of layering paints.

Most artists believe that Manet introduced and popularized Impressionism and avant-garde paining. In fact, during evenings he frequently met up with fellow artists, like Claude Monet who worked together to initiate an impressionist art exhibition. He was famous for his application of bold colors that gained the respect of other impressionists. However, Manet tried his best to set himself apart from them and had his own exhibitions.

Manet had numerous followers, and his influence and inspiration helped future impressionists refine their style. Among the artists who were deeply influenced by Manet included Eva Gonzales, Gauguin and Berthe Morisot. Together with Manet, they shared similar styles that have reinvented that ear's concept of art.

Manet's roughly painted style and photographic lighting in these works was seen as specifically modern, and as a challenge to the Renaissance works Manet copied or used as source material. His work is considered 'early modern', partially because of the black outlining of figures, which draws attention to the surface of the picture plane and the material quality of paint.

He became friends with the Impressionists Edgar Degas, Claude Monet, Pierre-Auguste Renoir, Alfred Sisley, Paul Cézanne and Pissarro through another painter, Berthe Morisot, who was a member of the group and drew Manet into their activities

This painting, which the artist exhibited in 1863, depicted an image of two men dressed as upper-class men, who were joined by a nude woman sitting comfortably with these gentlemen. In this artwork, the two men appeared to be deeply immersed in their conversation, with the woman simply sitting and minding her own self. A few distances from these characters, another woman barely dressed appears to be bathing in a nearby stream. As one looks deeply into the painting, it sends off a message that the scene is taking place in a studio because of the background's lack of depth. The use of broad light hardly created any shadows, which made it appear unnatural.

Another controversial painting by Manet is Olympia, which is a name Parisians used when referring to prostitutes. Bearing a contemporary theme, the painting featured a nude woman reclining and staring at the viewer in quite a mysterious fashion. It also presented a maid offering a bouquet of vibrant flowers to the reclining courtesan, which is presumed to be a client's gift in exchange for the services provided by the woman. There were also several other symbols used in the painting that all pointed to the fact that the woman was indeed a prostitute. These objects include the pearl earrings and silky shawl, bracelet, the orchid pinned loosely in her hair, and the black cat gazing at the woman. This was the kind of subject that was hardly a popular choice among artists during that era.

Manet expressed his desire to explore realism with this painting, which presented a more contemporary atmosphere. Although the painting's numerous features bewildered critics, it remained to be the common subject of scholarly publications during that era up to the present. When taken into deeper analysis, the painting showed images of social class. However, the barmaid is depicted as a prostitute, which the infamous Folies-Bergere was known for. Thus, the woman appeared both as a commodity and a salesperson in this painting.

During one of Manet's trips in the mid 1860s, he was immensely inspired by the paintings of Diego Velasquez. In fact, The Fifer proved his inspiration from the Spanish painting with its contemporary subject and his use of solid areas of rich color specifically in the darker parts of the painting. The painting, though, did not gain much attention from the Salon juries as it was rejected when he submitted this artwork in 1866.

Edouard Manet might have come across numerous rejections and criticisms during his time, yet all of these did not stop him from pursuing his passion to produce genuine, authentic, and original works. He also inspired several artists in that era, who believed that Manet had a true gift of ingenuity and superior artistry despite what critics said about his works.

In the 1920s many critics were considering Manet's work to be 'pure painting', fitting in with the Realist ideology. However in 1954 the Swede art critic Nils Gosta Sandblad began to look at Manet's work as highly modern and having been indicative of future art trends (beyond Impressionism). This idea has carried on until modern times and today Manet is considered by many to have been an artist genius.

Music in the Tuileries Garden

Self Portrait with Palette